I'm shutting down the Goth Garden on LJ. I'll continue to keep the page so I can read friends' posts, but I'm just going to post directly on the Goth Garden's FB page from now on (before, I was copying the Goth Garden to FB with RSS). I'm getting tired of deleting the spam comments on LJ, and I imagine those of you who are both friends on FB and on LJ are tired of seeing duplicate posts. Happy Holidays!

Yes, it's in the 70s today, making it hard to feel the Christmas spirit...but hard to feel bad about that, either. We BBQ'd (Omaha steaks from the grandparents), and I pottered around rearranging succulents, as one does in LA in the winter (or pretty much any time).

Here is some sad-looking plant matter. I cut the senecio apart to replant (too shady where it was before, and it didn't care for having the hose dragged across it from time to time). Usually I just stick it straight into the ground, but as wet as it is, I'm going to let the stems dry and callous a bit before planting them. The lambs ears I ripped out from under the ficus to replace the senecio. They look terrible now, but I imagine they'll be fine--they're that kind of plant: 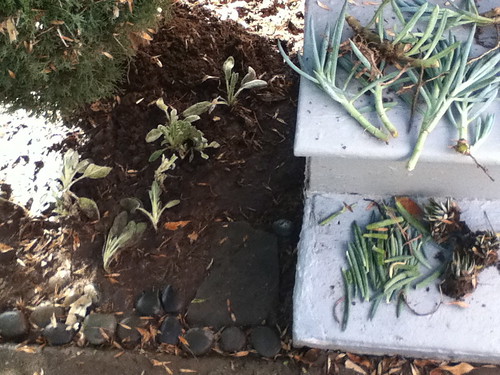 And I moved a couple of plants from this bowl and replaced them with others--thought it would balance the colors/shapes better. I'm still not sure it's right--it's a work in progress: 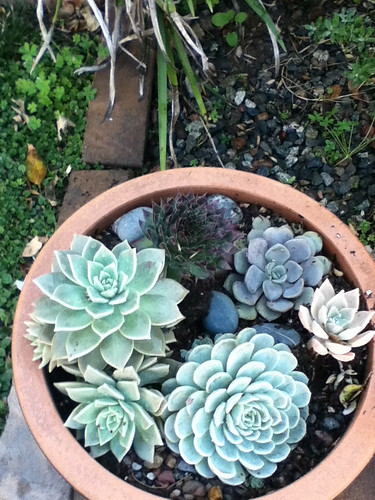 And here's a pic I took just for the heck of it--I replanted the little pink guy here a week or so ago after carelessly breaking the bowl it had been in. It's a favorite of mine. 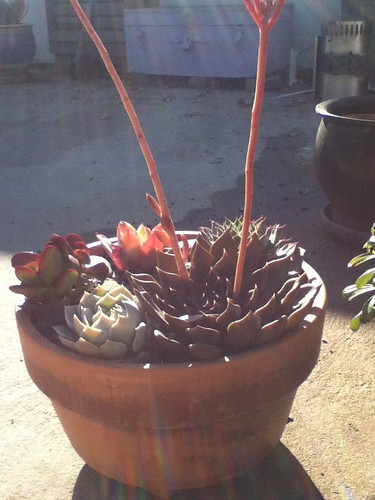 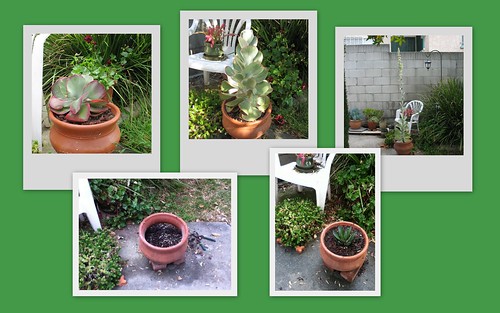 Back yard: Still looking pretty sketchy as far as the 'lawn' is concerned. However, the lantana is doing its thing: 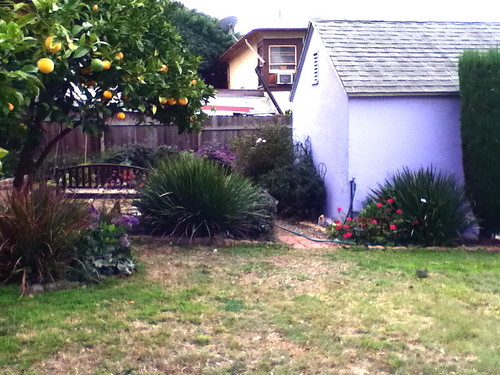 And, the holiday tree and W: 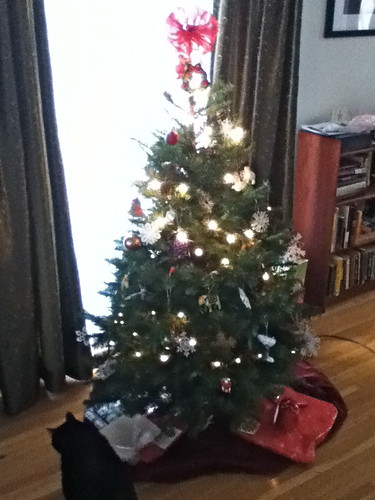 The garden is still pretty damp from Sunday's rain... 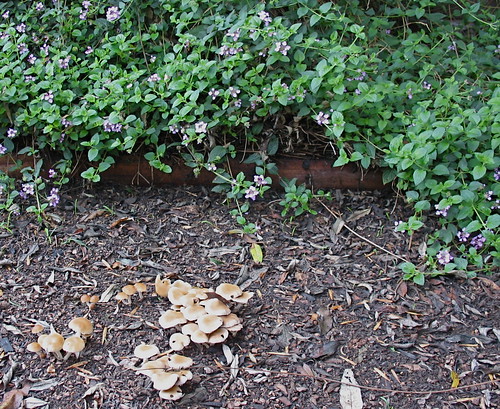 Here's the kalanchoe from a distance--now definitely taller than I am: 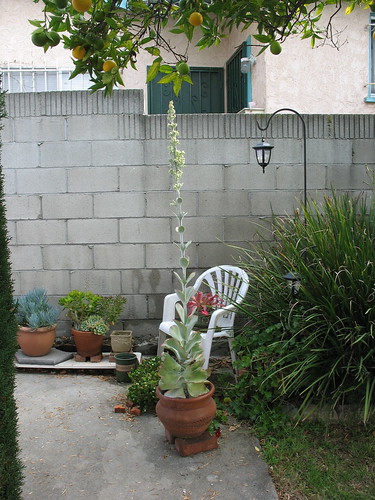 Not a lot is in bloom, but the rain HAS greened things up: 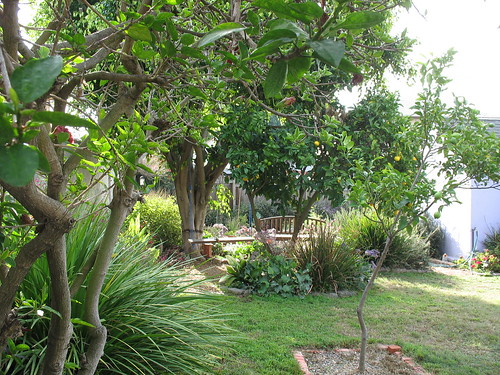 The new crop of winter weeds also really enjoyed the rain--time to get after them...

It's a good long time since I've posted pics, but then it's also a long time since I did anything particularly garden-oriented. Too much grading and a series of rainy weekends are my excuse. Okay, last week I cleaned up 3/4 of a bin of ash tree seeds, but that doesn't count. (Unless you REALLY enjoy demonstrations of nature's fecundity, I recommend avoiding ash trees.)

The garden is doing fine, despite neglect. 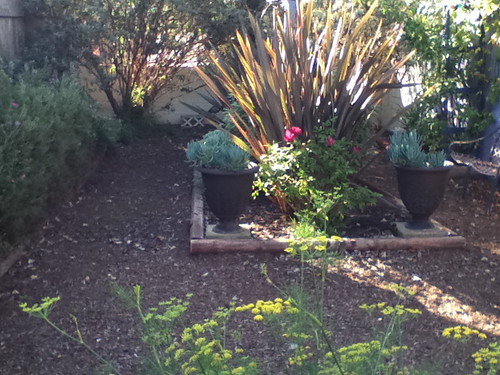 And here's the long-awaited result of the kalanchoe's growth spurt... 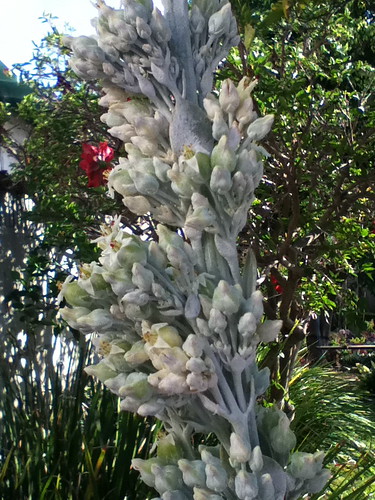 It's taller than I am, but the flowers themselves are not very impressive. I was hoping they'd be red or something.

Sally offers you season's greetings from the goth garden: 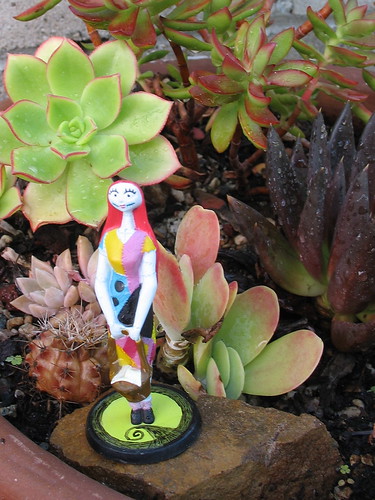 The garden is suffering a bit from the stress of the long dry summer but parts of it are still looking fairly nice: 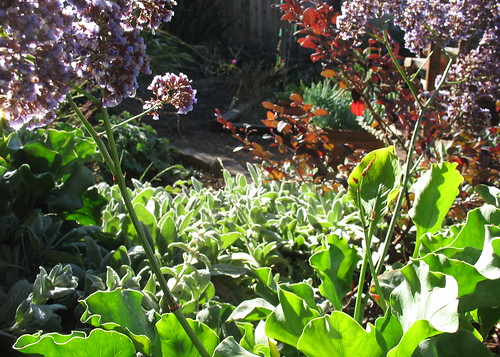 Especially in close up :) 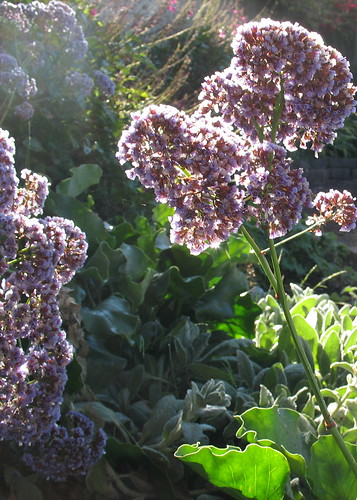 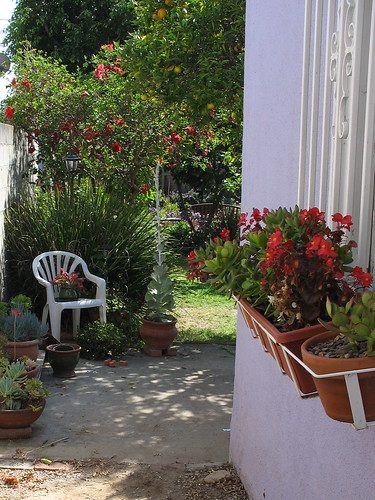 Planted some toad flax. I've wanted to try out this annual for a few years. It's the common name for linaria maroccana, and the variety I planted has the somewhat twee name 'fairy bouquet'. Also put in some viola 'blackberry sorbet' and a smattering of scarlet flax (leftovers of the dried plants from the summer). Not an expensive investment--the linaria and violas set me back about six bucks. Of course, the linarias may come to nothing--seeds that tiny are never reliable for me. Also spent some time mowing the lawn and trimmed back some of the flowering stalks of the wild iris in the front--everything looks much tidier as a result. But this was a lot of activity for someone who is only marginally healthy--this cold is tenacious. Over a week and a half later, it's still pulling me down. I keep saying I'm on the rebound, though, and I think it's probably true.

I think I will have to give up saying that this is too early for rain...I said it last year, and we had rain. And this year, we had rain a couple of days ago (a smattering--but even that much is not usual for us at the end of September) and will evidently have more this week.

This weekend was gorgeous. Sadly, I had a nasty cold. A week later than last year, when the first-cold-of-the-school-year struck on back-to-school night, so I count myself lucky...sort of. These pics are from Saturday evening which was about as perfect as can be imagined: 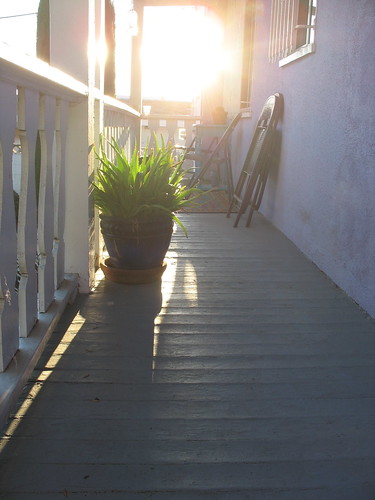 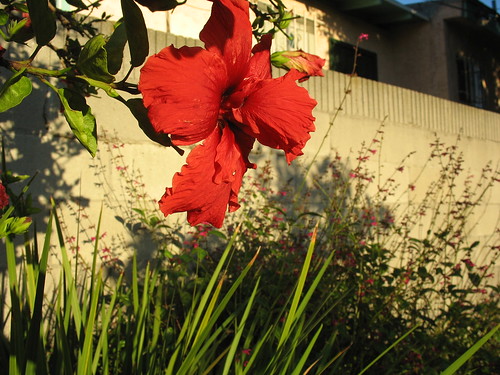 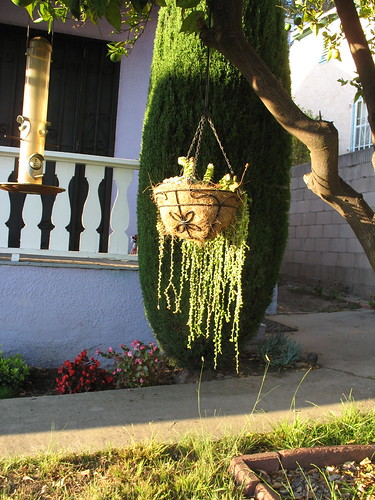